Letting people tell their own story

Amira Aleem, third sector writer and filmmaker, joined this month’s Relay event, Rethinking Storytelling in the Third Sector. In her session, she talked about how Amnesty International let people tell their own stories on social media on Valentine’s Day.

Amnesty International exists in difficult times and, with bad news exploding all the time, a lot of their work deals with political, moral and challenging topics to raise awareness around human rights issues around the world. However, it can be difficult to translate these serious issues to reach and relate to younger audiences on social media.

To engage with this audience, Amnesty is constantly trying new things, using digital and social media in light-hearted ways to campaign against injustice, summon support and discuss serious issues. Using positive tones, humour and wit tends to make content more engaging and effective; like the below tweet about Marie Kondo’s popular Netflix show, or by featuring #protestfaces on their Instagram timeline. 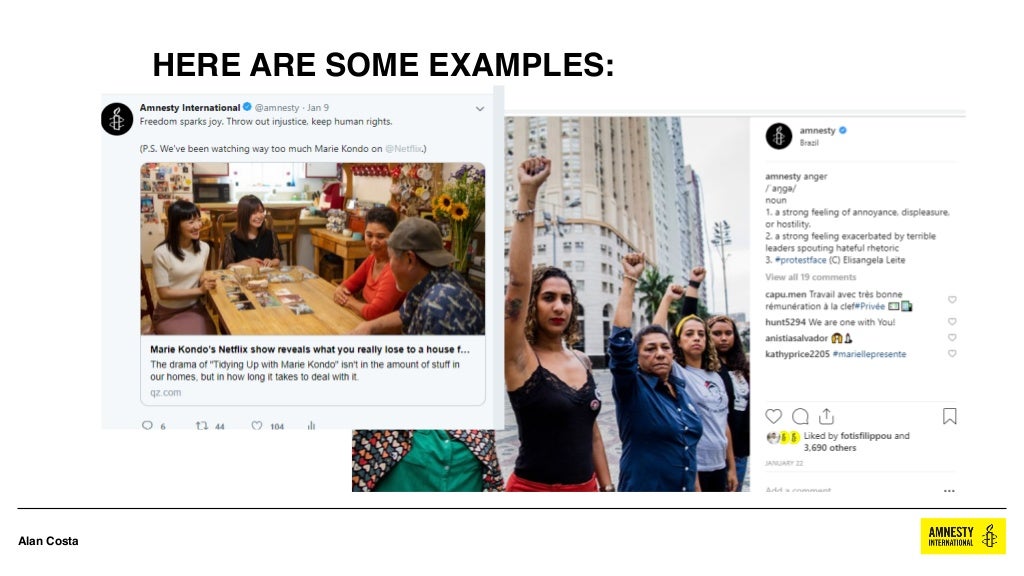 And then came Valentine’s Day.

The campaign centred on the story of Alan, an activist in El Salvador, and his collective, Afrobapho, who work together to raise awareness of LGBTI+ issues.

Although it looks like an LGBTI+ story, it’s actually first and foremost the story of Alan finding love and acceptance for himself. This explored conversations about mental health and self care, which are very topical on Instagram – the primary channel for the campaign. Set in the context of Brazil, which is politically tense for people of colour and the LGBTI+ community, it’s also inherently about human rights.

The impact of letting Alan tell his own story

Alan was allowed to tell his own story on Valentine’s day by interacting directly with Amnesty International’s platforms. He featured on their Instagram, Twitter and Facebook – using video, moving images and colourful photography. On Instagram Stories, Alan asked people directly to share their alternative love stories, and the team overcame logistical challenges by translating live as it happened. 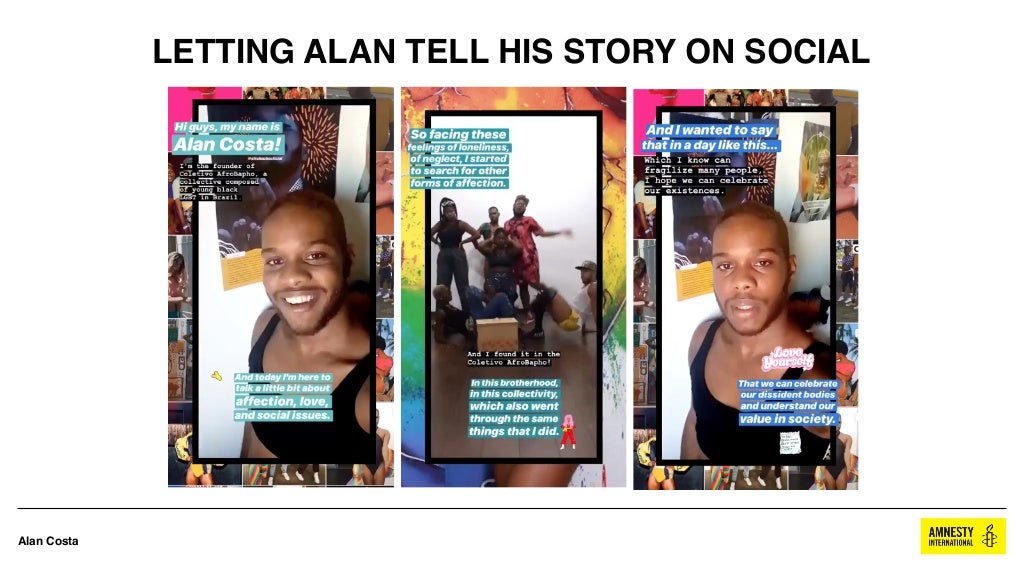 The campaign performed really well across channels, with the highly colourful images performing better than their black and white counterparts. Despite nervousness that the high-impact images might alienate or put off certain existing audiences, it was deemed crucial for the organisation to elevate other people’s voices and reach people who wouldn’t normally engage with their usual LGBTI+ content.

For someone working alone in a climate of fear, having a large charity support Alan’s work was also important and his excitement and passion for the project was a huge vote of confidence.