Claudia Knowles, Digital Content Strategist at Breast Cancer Care, appeared at this month’s Relay event, Rethinking Storytelling in the Third Sector, with an inspiring session called How content can empower your users.

There once was a time at Breast Cancer Care where multiple teams, multiple campaigns and millions of ideas made it difficult to gain control of digital comms strategy and planning.

But with a lot of hard work, processes were put in place with Trello boards, content planning sessions were organised and strategy documents created that helped ensure everything ran smoothly.

So what happened next?

Claudia’s team decided to give it all up and hand control over to their users instead.

What does it mean to be user centred?

First and foremost, it’s important to make decisions based on what your users need. This should be come from what they tell you through things like data, user research, feedback, Google Search Console and split testing.

It all comes down to really trying to understand who your user is before deciding what to create.

This user centred methodology was used by Breast Cancer Care as they started to create content for their BECCA Breast Cancer Care app. The app is designed to support women after diagnosis, where more than half of women struggle with anxiety and almost half with depression.

The app launched in May 2018 and, with almost 30,000 downloads, won the Big Lottery Health Prize in 2018. BECCA offers content in 10 different categories such as mindfulness, and more. Each content ‘card’ takes you to different pieces of content either on the Breast Cancer Care website or external content approved by the clinical team. 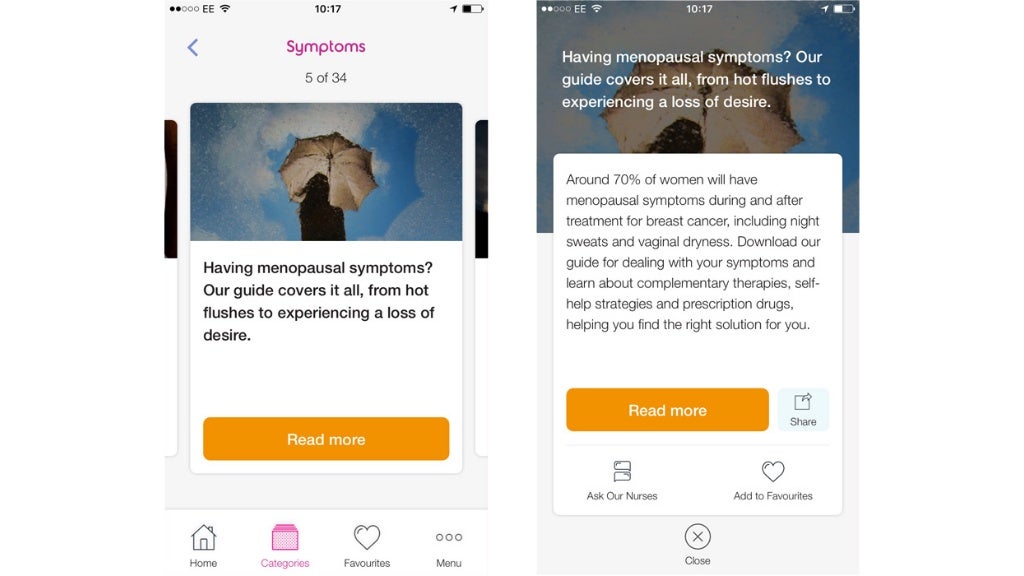 In the testing phase before launching the app, it was important to understand what people found useful. There was a lot of existing data from existing face to face services, but the way people interact with these services, and what their needs are in this context, are very different to how they would interact with an app.

A programme called Mixed Panel offered valuable insight into how users interacted with particular content e.g. the number of times people clicked through on a particular card or how often cards were ignored.

The most surprising (and therefore the most useful) piece of insight showed the most popular category was the ‘Blog’ category, which linked to real-life personal stories either on a brand-owned blog, or people’s own blogs.

One such example was Stella who was diagnosed with primary breast cancer when she was 49. She had expected to ‘ping back’ to her usual self after treatment, but found it much more difficult. Specifically, Stella struggled to get back into exercise, which had been a big part of her life before her treatment.

Asking Stella to write a blog for BECCA, which included tips of how she returned to exercise, became a more successful piece of content than the brand’s own blog about the same subject. The brand’s blog, which was written by healthcare professionals, was outperformed by Stella’s because while it had the expertise and the facts, it didn’t have the experience and personal perspective. That was something that only someone who has lived through a diagnosis could give.

So in the search to discover what users wanted, the answer wasn’t Breast Cancer Care. It was people like their users and people like Stella.

Realising the importance of personal stories

After realising this, the next step – and ultimately risk – was to try to hand over content to users by literally embedding personal stories at the forefront of every single communication.

Whether a fundraising or policy campaign, services or social posts, all communication became led by someone who had a lived experience of breast cancer or had been affected by breast cancer in some way. In almost every case, it received much higher engagement.

The next step was to roll the approach out beyond the digital team. Digital storytelling workshops for every team across the organisation empowered more people with the skills and ability to work with people they know well and see them as the best people to promote their projects.

Organic traffic to the brand’s blog increased 160% YOY. Throughout the BECCA testing phase, the retention rate increased from 5% to 55%. By working with users and service users to share their stories, the Facebook engagement rate became 10x that of similar charities. In February, the social media engagement rate was higher than ever.

The power of storytelling.

Becoming a platform for people’s stories created a community where people could support one another. It’s clear how powerful this can be for so many people in different ways. For the person sharing their story, it allows them to put their diagnosis into the narrative of their life and helps them to process their diagnosis. For the person reading their story, they’re reminded they’re not alone.

As part of this commitment to encourage women to share their stories and support each other online, Breast Cancer Care launched an event called ‘Blog and learn’ to share simple and easy ways to start to share your story through blogs, audio or video.

The outcome of this was amazing. Sarah, who had been diagnosed with breast cancer, set up a blog called ‘Ticking Off Cancer’ and, inspired by the event decided to create a video as part of Breast Cancer Awareness Month. She asked people on social media to send a video clip that represented their life with breast cancer. Anything from undergoing treatment to walking the dog – anything to show the experience beyond the tumour.

This has been historically difficult for Breast Cancer Care, who had previously trialled UGC with little success. But by supporting and working closely with Sarah, women were immediately more open to share and clips from all over the world flooded in. Watch the video below.

How content can empower your users from Raw London
ShareShareShare