Stand Up to Cancer’s bold new approach to human storytelling

Laura Morgan, Content Strategy Manager at Cancer Research UK, took to the stage at this month’s Relay event, Rethinking Storytelling in the Third Sector. In her session, A bold new approach to video storytelling for Stand Up To Cancer, Laura took the audience through 4 key steps to producing engaging video content.

Stand Up to Cancer’s video storytelling so far…

SU2C is a multichannel campaign delivered by Cancer Research UK in partnership with Channel 4. It’s a step away from CRUK’s main brand – both visually and in tone of voice. As a sub brand that attracts a younger audience, it has its own social media channels that are separate to the main brand channels.

In terms of storytelling, SU2C work closely with Channel 4 to create appeal films for TV. These films focus on people’s cancer experience: their diagnosis, the harrowing treatment, and the devastating impact it has on their life. These films have been incredibly successful in motivating audiences to donate in the right context.

However, it was important that their website and social channels engaged audiences outside of this. After reviewing their video storytelling, new opportunities to produce targeted video content specifically for these channels were identified.

As a result, in 2017, SU2C developed a series of social-first patient stories; 4 minute films filmed in a studio centred around 3 patient experiences. However, they didn’t gain much traction when shared organically across social channels. This was because they weren’t very distinct from other charity case studies, and didn’t stand out generally from other content in audiences’ feeds.

1. Identify what stories performed well with the audience

First, when you’re looking to try something new, you need to have evidence that it will work. Looking at what works for your audiences currently, understanding what they might want, need or expect from you in the context of social media is key and will also help you get stakeholders on board.

For SU2C, the best engagement had come from posts that had an uplifting, inspiring or cheeky vibe – particularly when it’s user generated. But this proposed a key challenge: to not to downplay people’s experience of cancer, while taking a “people-first” approach to their whole story, not just their cancer story.

2. Look for inspiration outside the charity sector

Taking a diverse approach to finding inspiration can help you identify key characteristics of successful content and help you find fresh approaches to telling your stories.

The below video, created by the BBC, shows a singer coping with hair loss as a result of cancer treatment with a beautiful henna crown. It’s a fantastic example of an uplifting story that focuses on more than just her cancer story – and it went viral for the BBC.  However, interestingly, when the post was shared on the SU2C Facebook account, it had even more engagement than the original.

Humans of New York and 60 Second Docs were also a big source of inspiration, citing their short-form nature and intimate moments from ordinary people as key success drivers.

A key challenge for many organisations is sourcing strong case studies. To make this process easier, a working group was created with CRUK’s PR team, Media Volunteer Liaison Team and Social Media Team. Onboarding each team with the full plan, evidence and examples meant they were able to find stories much more quickly and efficiently. It also meant that teams could work together better – story angles could be aligned with PR, and input from the social team helped ensure stories worked well on different channels.

As a result, five storytellers were quickly found; Amanda, Steve, Sue, Chris and Holly. Budget remained relatively small, with a small production agency working with each storyteller to tackle subjects like:

You can watch Amanda’s film below, and visit SU2C’s website to watch the rest.

Being agile is key when you’re trying something new. Tailoring the targeting depended on each individual video, and measuring organic performance for each one helped to ascertain where and when to allocate budget. She also trialled dividing targeting across paid Facebook and Instagram for the first time, and, after achieving better performance on Instagram, continued to combine placement for the remaining videos.

Was it worth it?

The campaign earned 2 million reach and 1m video views – which is more than twice the audience of their Facebook and Instagram channels. 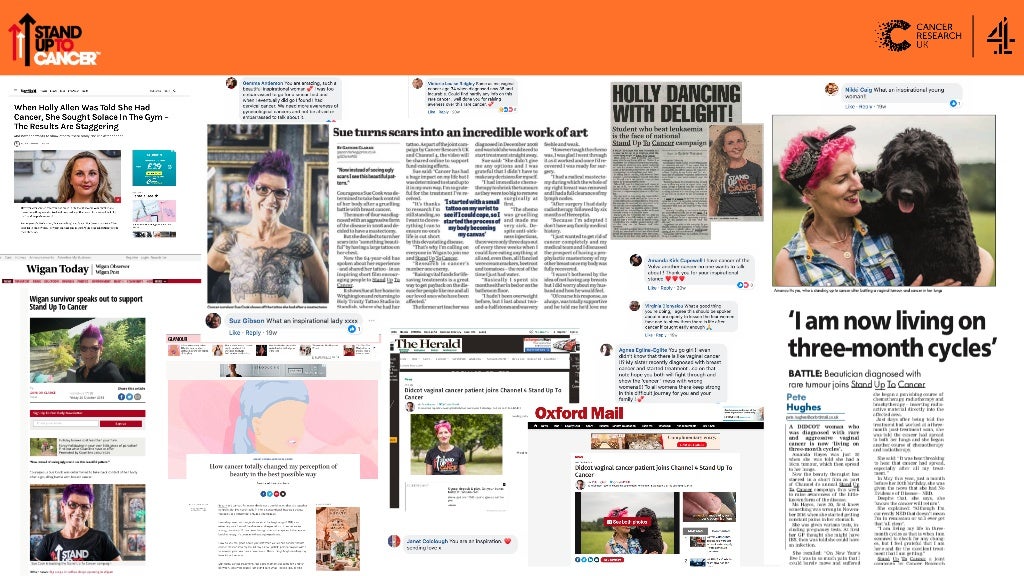 Although this was a social first campaign, the activity secured lots of PR coverage for three of the women both regionally and nationally. One learning was that no PR coverage was secured for the male storytellers, however, which will be a key consideration for future campaigns.

And the story doesn’t end there. The storytellers have continued to be integrated into other activities, and the team is always looking for more opportunities to help them share their stories.

If you’re trying a new approach to video storytelling: