Savitri Waney Charitable Trust is a small yet ambitious trust determined to alleviate the suffering and poor health in some of the poorest rural communities around the world. One of their main programmes is Curable Blindness in India, and we were delighted to have the opportunity to visit a hospital in Bihar, Northern India to follow a patient journey from blindness to sight. We spent 10 days with a family of 6, 4 of whom had severe cataracts, as they underwent treatment.

You can watch the full film and learn more about the campaign here.

Below are some behind-the-scenes photos, stories and experiences from our Creative Director, Louisa Wells, and our Senior Editor & Camera, Lee Jones. 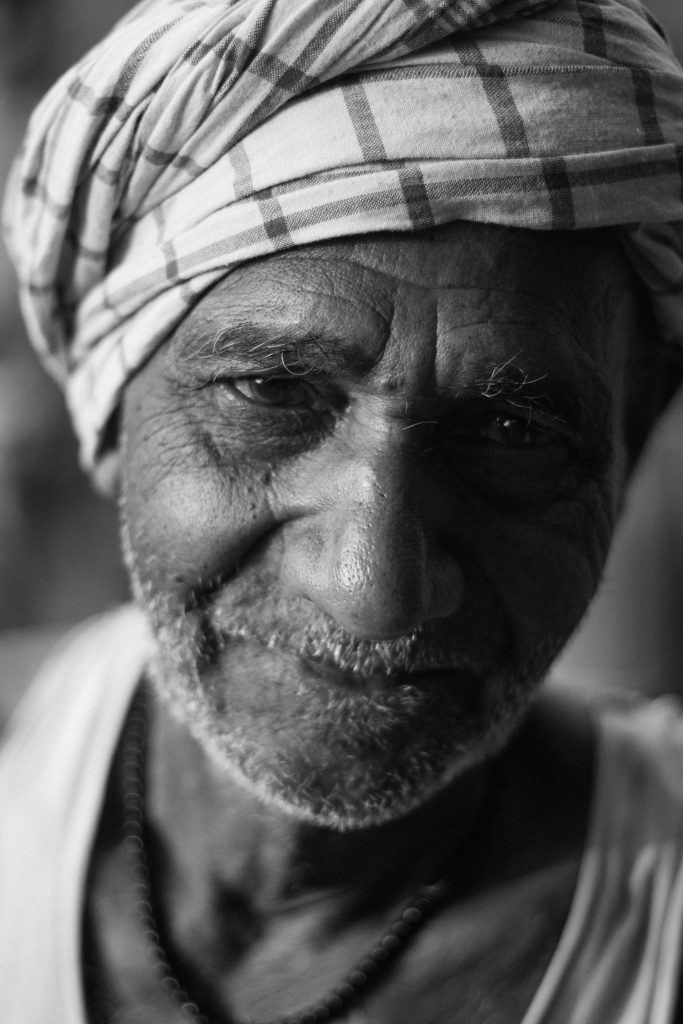 Lee: This was taken at the end of our first shoot day. We had travelled to a very rural village where we were shooting all day in hot and humid conditions. Little did I know it was the tail end of monsoon season – I have honestly never sweat so much in my life (a grey T-shirt was a big no no!). We had been shooting at sunset and the light was perfect, so after we packed up our kit I took out my stills camera and started to take some portraits of the villagers whilst the sun was still low in the sky. The locals loved having their photograph taken and were even more thrilled when you could turn the camera around and show them the results – it always brought a smile to their face which was great. 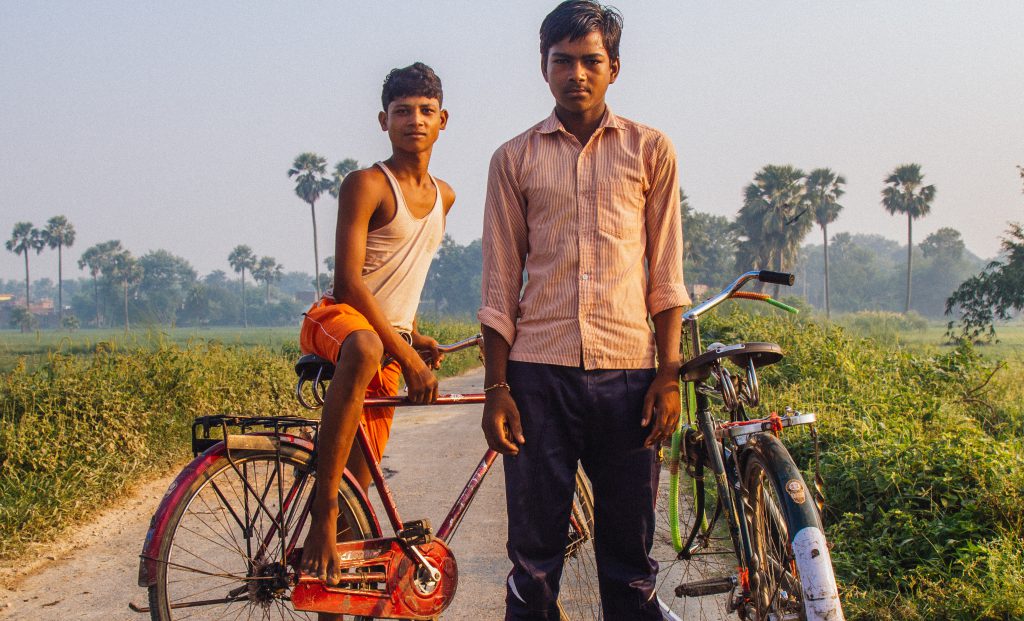 Lee: Sunrise and sunset are no doubt the time for the best lighting conditions. I took this photo on a 5am stroll to watch the sunrise. I had been filming and photographing people on their way to work in the fields when these guys cycled past me and stopped. I conversed as much as I could as my skills in speaking Hindi are pretty much non-existent. I asked if they would like a picture and they agreed – they instantly started to pose with very serious faces and strong body shapes. The strong and serious pose seems to be a running theme with the young men of India, the serious face look must be in. (If these guys were in a boyband this would totally be their album cover, no?) 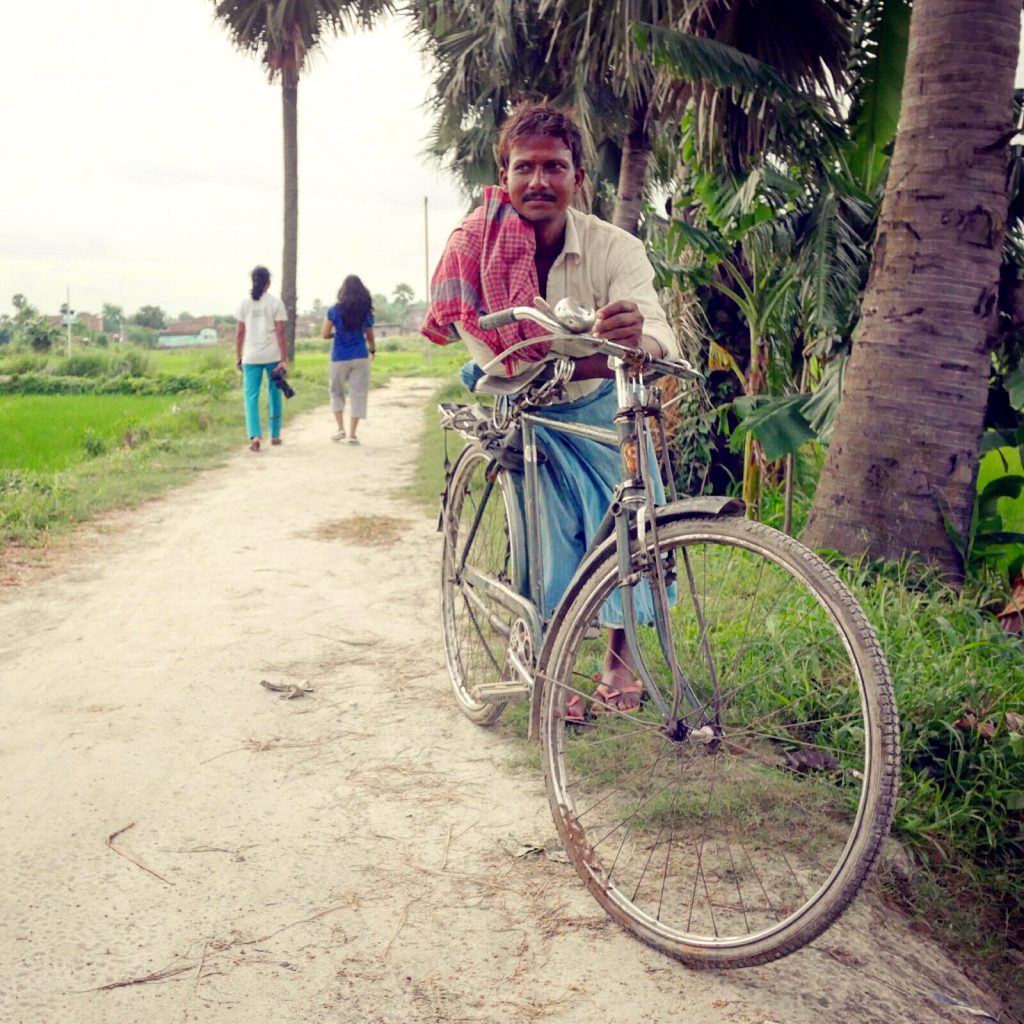 Louisa: We had a couple of sunrise walks to get our beauty shots, and this particular day was a grey and disappointing one. But it did offer lots of opportunities for us to capture locals posing with bikes – the easiest photo series you could aim for in Bihar I reckon. 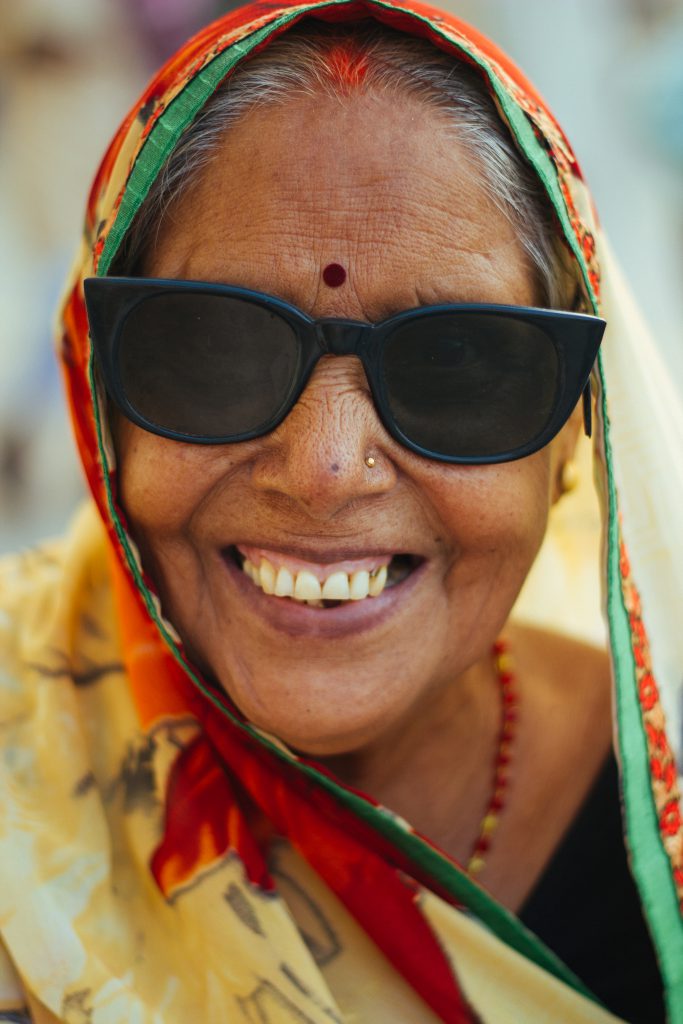 Lee: I took this portrait of this smiley woman as she was strolling around the eye hospital. She is wearing the shades I’m guessing because she has just had surgery to remove cataracts, and they help to prevent dust and harsh sunlight on the sensitive eyes. Either that or she is just one cool lady! 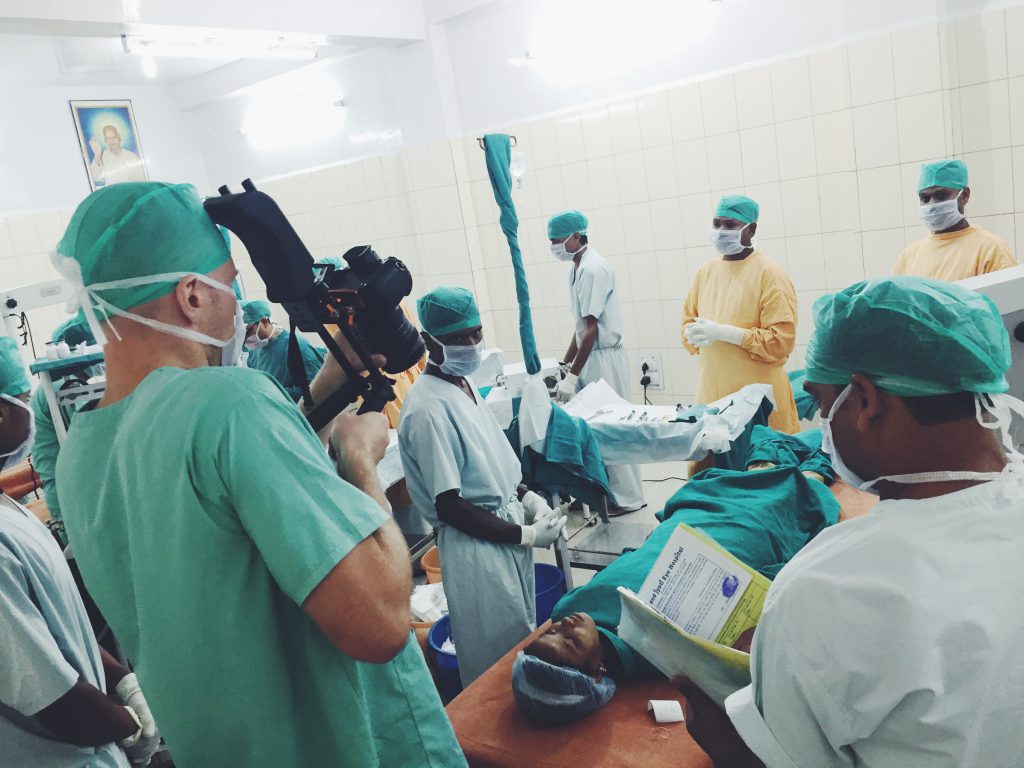 Lee: Shooting the surgery was unbelievable. Watching the intricate procedure that goes into removing cataracts was amazing and we got some eye watering footage. The whole surgery was carried out so professionally and we were given the access we needed to get the shots we wanted. It was my first time wearing scrubs too which I must say are uber comfy. 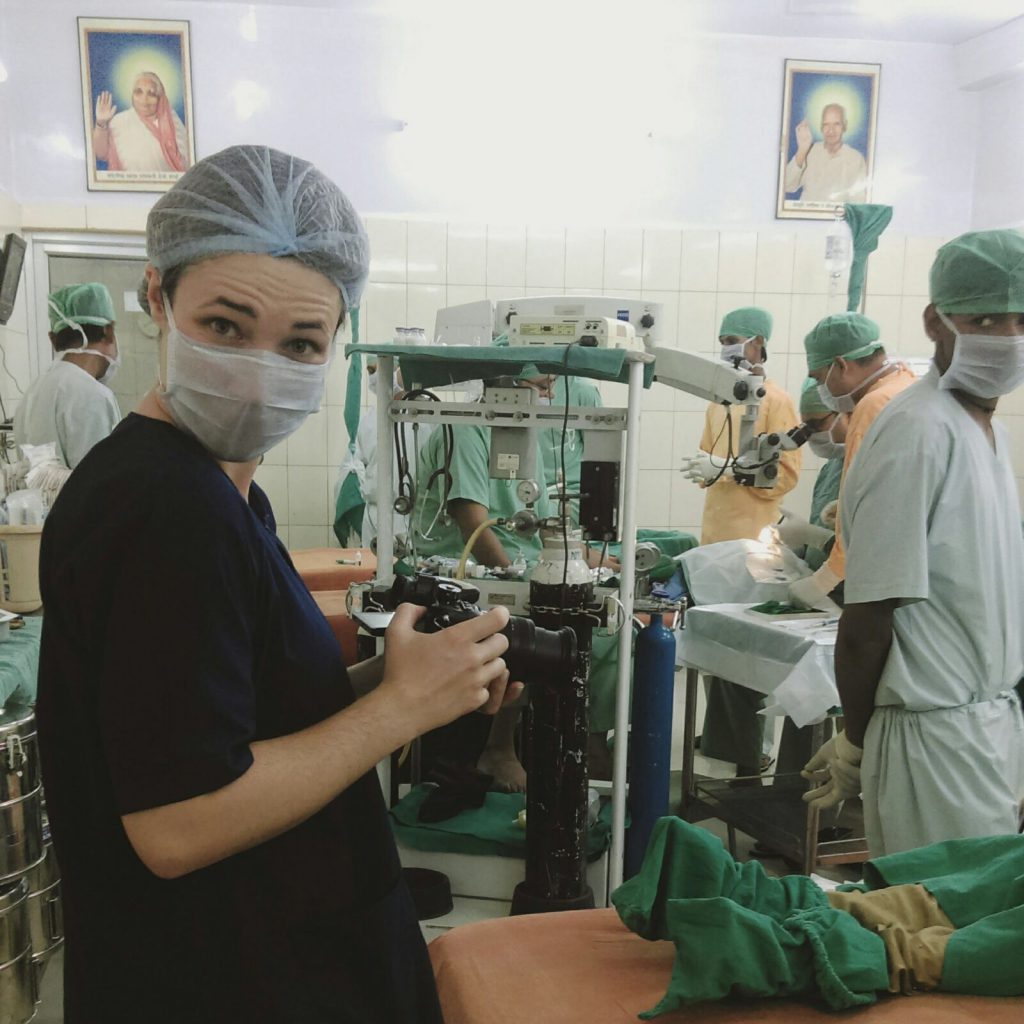 Louisa: Filming the actual operation on the eyes was fascinating, and a touch disturbing! We’ve got some insanely detailed shots of tools poking around in eyeballs which, for everyone’s good, will be sparingly used! Most of all it was an exciting chance to see a real life surgery and witness the impressive skills of the surgeons at work here. I promise we weren’t as annoying as the guy on the right’s face suggests though! 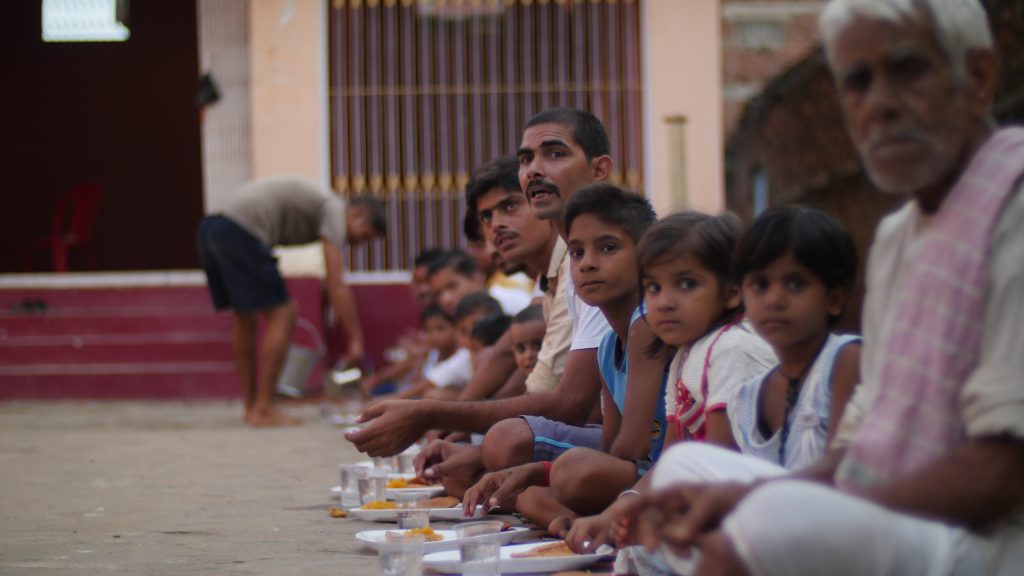 Louisa: We managed to stumble onto the inauguration of a local temple on the final day filming and were offered food to share in the celebration. It was great to be invited in, though having been warned far too many times about even looking at anything resembling street food, this did seem like a moment we’d regret on the 18hr journey home! But amazingly, we all survived stomachs intact.